YESTERDAY, while Sharon was out painting, I spent the afternoon walking around old Siena. I was fortunate to join the last VIP tour to the very TOP of the Siena Cathedral (Italian: Duomo di Siena). The cathedral is a medieval church, dedicated from its earliest days as a Roman Catholic Marian church, and now dedicated to Santa Maria Assunta (Holy Mary, Our Lady of the Assumption). The cathedral itself was originally designed and completed between 1215 and 1263 on the site of an earlier structure.

Please enjoy the photo gallery pictures below and the amazing views I saw from the top.

Train at the Siena station

This morning, my last in Italy, I was scheduled to fly out of the Florence Airport (FLR) at 10:00 am. Sharon wanted to take me to the airport by car, about an hour’s drive north of our villa, but I insisted on taking the train so she could paint.

Sharon rose with me at 4:30 am while our Hotel Villa Scacciapensiera called a taxi to the train station and then she returned to bed after kisses goodbye. When I arrived at the station, I found three people sleeping in the lobby and one train outside. The engineer wasn’t interested in conversation, so I validated my ticket and climbed aboard as it’s ONLY passenger.

Right on time the train started with a lurch then came to a halt again. The engineer walked up and down the train a couple of times and was soon met by the arrival of the conductor. As he passed by on his way to the front, he gave me a smile and a hearty ‘buongiorno’ and entered the forward cabin. Moments later we were on our way.

As I wasn’t awake enough for reading, I pulled out my smart phone map to track our progress thorough the countryside. To my absolute shock, the little blue dot was moving south. In a panic I traced the track ahead in hopes there was a turn north, but the track continued winding southward, 180 degrees away from my flight in just four hours.

Sheepishly, I approached the front cabin and was ready to knock, but for some reason just opened the door. A little surprised, the conductor asked if he could help. With my pride well behind me, somehere on the tracks outside the Siena station, I firmly stated, ‘I’m on the wrong train.’

The conductor accompanied me back to my seat and kindly offered to check the schedule to offer a solution. When he returned he advised me to get off at the next station, buy a new ticket for Siena, and wait for the train that would be along in about 45 minutes. He encouraged me to find someone or a cab to drive me to Florence as the train from Siena would not leave in time for me to make my flight

The train came to a halt at a little station in Asciano, a town that Sharon and I had driven toward a couple of days earlier in search of painting sites. The staion was wide open, but competely abandoned. It was eerily peaceful. As I bought my ticket from the machine I pondered whether or not to call Sharon to rush me to the airport. I didn’t think long. She had too much to do. I would sooner miss my flight than cause her to miss a painting day.

So, without a firm plan, I paced the platform for what seem like an interminable time. About 15 minutes before the scheduled arrival of the train, people began converging on that little station in pairs and threes. Within minutes it was packed with commuters of all ages headed to work in Siena.

As I sat on the now crowded train and watched the rolling green hills go by, I pondered my options. Missing my flights could mean anything from a hundred or more to rebook with ralatively ugly connections to spending a night in Florence to repeat the same route next day. Within 30 minutes and one stop, we were back in Siena.

Upon arrival I checked the departure board for Florence with the vane hope that the conductor had been wrong, but to no avail. There was only one thing to do. Off to talk to the cabbies.

After a brief conversation with three friendly, but less than fluent English speaking taxi men regarding timing and cost, decision made, we were off. If traffic wasn’t too bad I would make it. The cost was far less than the inconvenience of missed connections. My cabbie, Romondo, was a great guy who seemed to speak better English than before.

As he pushed the speed limit, slowing only for the well-marked electronic speed detectors, I was encouaged as the kilometers to Florence ticked down quickly. Romondo made a call to a colleague to check on Florence traffic and determine the best way in. He seemed pleased with his choice.

After about a 45 minute ride, Romondo proudly pulled in front of the relatively empty Florence airport at fifteen minutes before 9. I thanked him, gave him a handsome tip for his efforts, and I was on my way home! 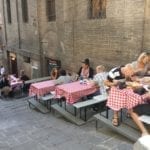 Streets are steep, crowded, and great places to eat, but watch your step. 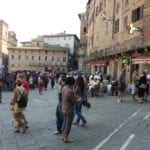 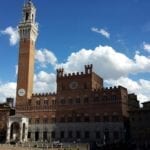 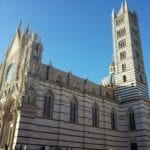 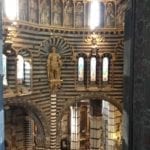 I was fortunate to join the last tour of the upper regions of the Cathederal offering breathtaking views. 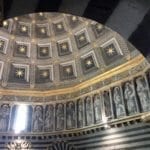 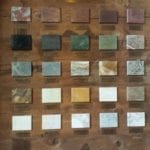 All the kinds of marble used in the Cathederal 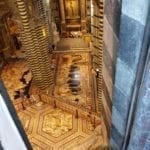 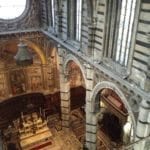 The altar from high above 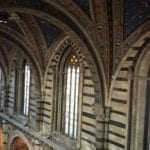 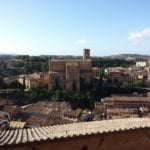 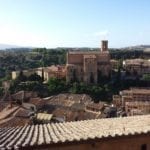 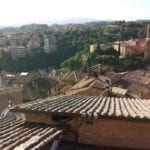 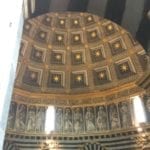 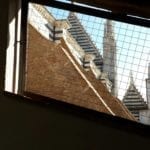 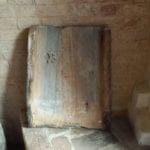 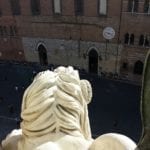 We were wayyyy up. 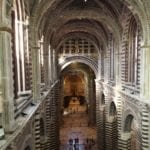 The nave is awing in size 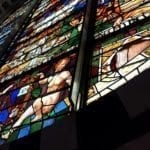 The massive stain glass window on the front of the Cathederal 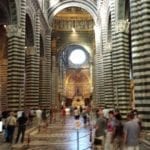 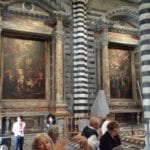 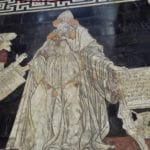 The floor art is all inlaid marble 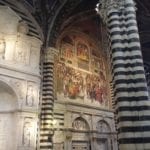 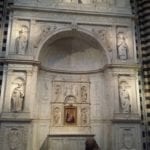 A young sculpture by the name of Michaelangelo was commissioned by the cardinal to do these statues. After completing four he was called away to begin work on the statue of David 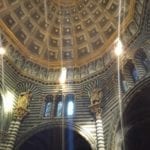 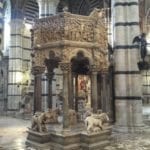